A thank you to Climbing Magazine for covering our trip to Greenland.  How cool is that?http://www.climbing.com/news/team-glitterbomb-finds-gold-and-sorrow-in-greenland/

and let's not forget that we can ALL support Paradoxical things....
Paradox Sports paradoxsports.org
Lonely Otter Farms--- www.facebook.com/pages/Lonely-Otter-Farm/345860612180249 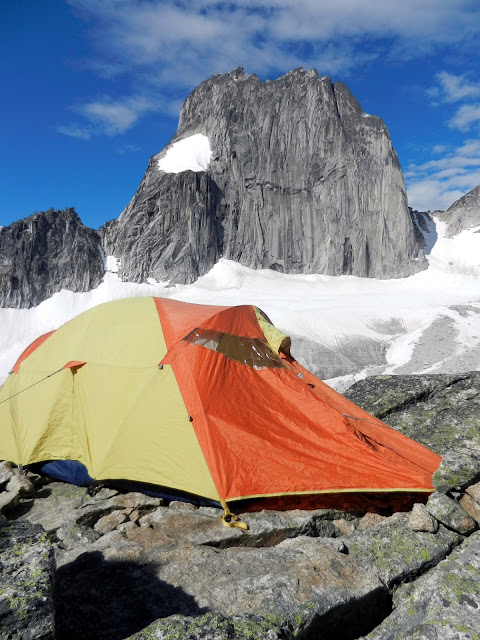 I quickly escaped Colorado and have been sorting the changes in Canada.

This is my first trip to the Bugaboos and other nearby destinations. Time is flying by already...never not enough!

A quick chicken coup wrap of the van led into the stair-master work-out.  This was completed 2 hours later, with my good friend Chris Brazeau leading the way.

We chatted with some friends in Applebee campground, arriving at a plan for the following day.  I hoped to acclimate to the climbing a bit, crossing my fingers we would hop on a moderate route on the West Face of Snowpatch, Wildflowers or Surfs-up.

A lazy first morning worked the climbing day to my advantage. Ascending the Snowpatch-Bugaboo Col was not as intimidating as I imagined.  Soon we were basking in an early afternoon sun at the base of the West Face of Snowpatch Spire.  Instead, Chris and I were inspired by a dihedral system in the sun.  The dihedral was slammed shut, but we found a spicy way up to the right.  Climbing a new route-6 rope stretching pitches at 5.11, 5.8,5.12,5.10,5.11,5.10.  TO THE TOP!  Might call it Wild Falafers or Wile Flowers.

Posted by Quinndalina at 1:15 AM No comments: