"Watson Lake! We will meet you somewhere near Watson Lake.  There is only one road right?"  I inquired with Craig over the phone.  This would be our last communication before whisking him off his bike in the middle of Northern Canada.  From there we were to catch a Beaver plane to Glacier Lake and the Cirque of the Unclimbables.

The plan hatched a few winters ago.   I was offered a guiding gig in the Phoenix area, and took it.

My parents had moved to Phoenix sometime near the end of my undergraduate education at the University of Minnesota, so I had grown to enjoy Arizona.  My parents live in East Mesa, 5 miles from the Superstition Mountain Wilderness area, nice access to climbing and trail running.


Winters in Arizona are amazing...back to the story.

I posted on Facebook of my desire to rent a room in Phoenix for the winter, living with the parents was not an option.  Love you mom and dad.   :)

Sure enough, my friend Craig and his lovely wife Rae responded.  I didn't know Craig super well, we climbed together a few times winters ago.  We met via MountainProject.com, as I was looking for partners.  Since, we stayed loosely in touch.


Upon moving to their home in early December of 2010, Rae mentioned that Craig was not actually home.  Fortuneatly, they both had taken an "early, early, really early retirement."  Rae decided to pursue her Ph.D and Craig played outside!

Craig, though, had been scheming a bike trip from Florida to Alaska and hoped to round up some peeps to climb the Lotus Flower Tower along the way.  Along the way!!!!
Therefore, Craig was in Seattle doing some contract work with his former employer Intel to help fund the adventure.
(Craig has done many bike tours throughout the U.S and is an amazing all around athlete, ex-gymnast etc.)

Rae passed all this information on during our first delicious dinner.

"Well, has he found anyone to go up there with him?" I asked.
"Not yet," she responded with a smile and a twinkle in her eye.

Two weeks later....just in time for the Holiday party they were hosting, Craig arrived home.  I hadn't seen him in almost 3 years.  He exploded with open arms, a fantastic humor, and even haggled his new roommate to participate in a pull-up contest.

By March, Craig had decisively gotten the ball rolling.  He contacted Warren of Kluane Airways, had made our deposit...we were headed to the Cirque of the Unclimbables!!

End of April 2011, I departed for summer in my beloved Estes Park and Craig departed for Florida to begin his bike ride.

Sometime near the end of May, Craig made it to Colorado.  We did a slide show to promote his cross-country bike adventure and our Canadian one to come.  We also climbed a little...sadly too early for the Diamond.
I also joined Craig for a little bit of the bike on 287, finishing just north of Larimer, Wyoming. 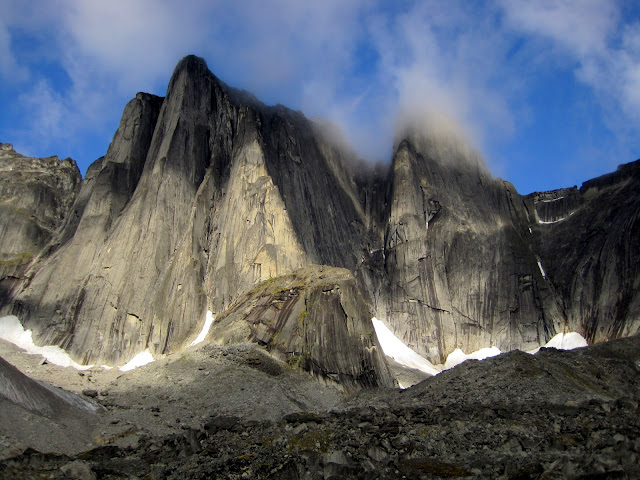 July 14, 2011.  Driving through Northern Canada and tracking Craig..... trying to think like a guy who had been biking for months.

We stopped to soak at the Liard River Hot Springs, hoping to run into Craig.  We were a half day drive from Watson Lake...turns out we were just hours behind him from the hot springs.  We ran into him later that day, Craig was stopped at a little cafe eating a second breakfast...I spotted his bike along side the road.  We lightened his load as he continued the ride to Watson Lake.  From there we purchased food, loaded our packs, and headed all together down 300k of dirt road to Finlayson Lake.


A 20 minute flight landed us to Warren's place, Inconnu Lodge.  The following day a gorgeous 45 minute flight took us to Glacier Lake, passing by the Vampire Spires.  We landed and promptly began the 6 mile trudge up to Fairy Meadows, home of the Lotus Flower Tower!


We climbed, we laughed, we bouldered, we sport climbed new and old routes (some put up by a Korean team), and played may games of Trivial Pursuit.  After 3 weeks, 16 days of them rainy....we hiked out on the most bluebird day of them all.

We returned to Watson Lake.  Craig hopped back on his back and continued to Alaska, Denali was his final destination.  I returned to Colorado the slow way, climbing Liberty Bell and others along the way home.  My lovely friend Giovanni returned to Colombia!  What a great trip with wonderful people!

Thanks Craig for dreaming big!


Posted by Quinndalina at 8:30 PM No comments:

Return of the scheduled chaos

Man.  I wrote a little diddy on the plane ride home and somehow managed to delete it.  Ops.


One month off and I come back to a ton of work.  Two restaurants, guiding trips for Kent Mountain Adventure Center, finding time to volunteer for Paradox Sports, and planning and promoting Dovetail retreats!  A little hectic, but also wonderful as I will be off climbing both April and May.  This also means the "Corpse Pose" time of my life is over.  Training time begins!
Yesterday I climbed at Movement and discovered my endurance is, well, um, what is endurance again?

I excited for my upcoming adventures this spring and summer!  I am super  inspired by my fellow Trango Athletes latest adventure, Amy and Myles, http://roamingbanditos.blogspot.com/2013/01/plate-tectonics-vi-512-c1-east-face-of.html!  So rad!!
Can't wait to train, climb outside, teach some yoga, visit the desert, the big ditch and Greenland!!!

More on my adventures and training soon......

Posted by Quinndalina at 11:44 AM No comments: