2/3 CONTINUED : I wrote this piece for a lovely little journal called Sidetracked.  It contains  incredible stories and beautiful photos of adventures, culture and experiences around the world.  Get the June issue and you can finish reading my story!

I am not there yet. 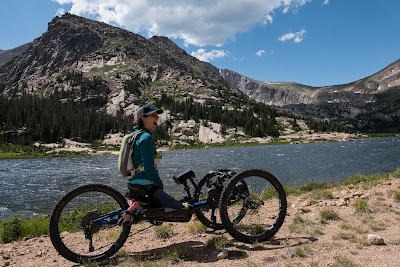 I am one year and a half into this new relationship with sitting.  On October of 2017, I fell while rock climbing in Yosemite National Park.  I had a rope.  I had a climbing partner.  I did not have enough gear in place and there was too much rope in the system.  I fell over 100 feet.  I had climbed the Nose on El Cap nearly a dozen times previously, from my virgin 3 day ascent to speed record ascents.  This day, my partner and I were intentionally climbing fast.  I led the first block of the route, covering nearly 1500 feet in just over 2 hours.  Fifty feet before the scheduled shift change on a feature called the Boot Flake, something happened.  My foot slipped or a hand or seemingly a combination.  My gear placements were minimal, a bolt 30 feet blow me.  This is one tactic people use for speed climbing this route in particular,  I usually have two pieces of gear tethered to me as I ascend, for some reason on this day, I was being more cavalier or naive or stupid.  I only had one in.  The distances are rough estimates.  Either way, granite zoomed upwards before my eyes as gravity took hold of my figure.  My body ricocheting off a piece of rock independent from the main cliff, named Texas Flake.  I now lay nestled in a small chimney still over a 1000 feet up the almost sheer wall.  I took the fated, “unsurvivable” fall in the most horrendous of spots probably on the entire route. 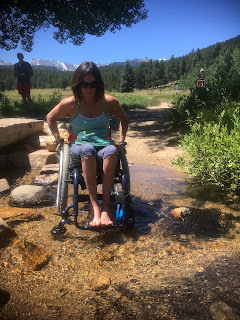 Every morning the wheelchair beckons for closer company.  I acquiesce, I certainly don’t want to lie in bed all day.  Sitting was never my plan in life, laying down certainly doesn’t compute.   My arm position my left leg over the edge of the bed and then the right.  I sit up using the core muscles still available with a heavy push of planted hands and triceps.  The lower limbs, now considerably atrophied, dangle in a space unaware of their surroundings, temperature or that they are even attached to me.

The spring snow melts in my town of Estes Park, the Big Thompson increases her burble.  The hum is subtle out my bedroom window but as earth revolves giving us more daylight, the sound amplifies.  Summer breezes, snow melt fades as time passes, the swollen river simmers her proclamation, gradually.  Blue skis are common every morning but inevitably some part of the mountain range will be surrounded by afternoon dark gray storm clouds, dousing torrential rains and (susceptible to) unpredictable electrical impulses shooting out of the sky.  Booming thunder bouncing from granite gendarme to granite gendarme.  The river reacts, snug banks absorbing the surging water to her best ability.  Sometimes there is a spill.  Sometimes overwhelming floods wreak havoc.

My healing process seems similar to this earthly cycle.  My grief floats through the raging rapids, sinking in, jolting into boulders, dragging across shallow bottoms, all while trying to maintain an airway as it jostles across the unforeseen landscape in one piece.