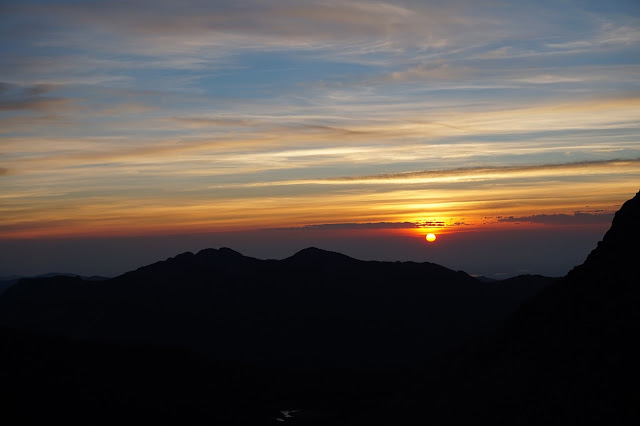 This September was Rocky Mountain National Park's 100th anniversary. Being an obscure goal setter to keep myself interested, busy, whatever you call it, I decided to climb 100 alpine pitches in the park.


At first I was trying for as many different formations in the park as possible.  This objective was going well, but saying no to the Diamond is like saying no to red wine and chocolate. You just feel better giving in.
Hallets peak is similar. It's a wonderful solo. Its a wonderful half-day climb. It's groovy to climb three times in a work day. ;).

I counted 109 pitches. I counted the North Chimney as one pitch, as we simul-climb or solo. Having climbed it four times = four pitches.  My dearest margarita loving friend suggested a kindly correction.  If I am to count pitches, I should be counting them as per the guidebook.
So I need a recount.  The number is higher.

Either way. I achieved my obscure summer goal.  I climbed on formations that I hadn't climbed on previously. Like Chiefshead.
WTF.  Max rallied. I worked a rescue until 10 pm the day previously. 60% chance of showers and many alpine days throughout the week had me tired.
Sorry, I blacked out.  Did I just tell you I was tired.
I was hesitant. Definitely just hesitant. Bed seemed nice. 4am came quickly.
Max made coffee. He dragged my ass out of bed, tucked me into the truck, nearly pushed the yogurt into my mouth at the trailhead.

Okay maybe not that bad.

We started hiking. Clouds swirled slowly. Non-threatening poofs spooning the granite spires. Lovers not ready to part with dawns first rays.  We passed Spearhead with a minor glance. Max was on a mission for a new line on the northeast face if Chiefshead. As we neared the cliff, the lines still looked good.  Blue sky poked her head out just enough to support a mission upwards. Off we set!!  A ballsy 5.12 pitch off the deck, eventually led into some lovely 5.11 corners and cracks with 2 sections of low fifth class linking dihedrals.  We topped out just after noon and descended quickly. During our lunch break, I began my push for another climb on the Spearhead. As we packed up and meandered. Water droplets released from above. Persistent annoying mist, not a downpour. Bummer.


I had never climbed on it. Saving it?  Blowing it!  Adam Baxter and I climbed Birds of Fire on the Northwest face of Chiefshead the day prior, bivied and rallied for day two in Arrowhead.  Arrowplane. SickbiRd.

Posted by Quinndalina at 7:57 AM No comments: